Home > Customer Service > News Updates > 2012 Articles > One Ford
What's this about Fords’ new IT Direction and its Global Vehicle Strategy? 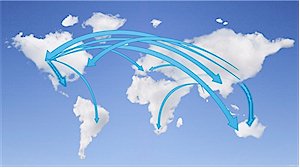 Have you heard the term, Cloud Computing?

Well we are now starting to hear about this technology entering the Automotive Industry.

With cloud computing, analytics and Google’s predictive software, it is possible that the Ford vehicle of tomorrow will be able to learn a driver’s style, habits and routine and consequently make its own decisions to improve the vehicle performance and efficiency.

Currently at Ford, the research and development teams are working on vehicles that can be made to change their performance to deliver optimal driving profiles for the conditions and route the vehicle may face for each journey.

Ford’s own driver research and analysis done over the last 2 or 3 years and Google’s predictive software are being combined to create a smarter car. The Google application-programming interface (API) can convert your historical driving information data into useable real-time predictions and figure out where you might be heading.

The Google API allows the vehicle to utilise the information that each driver creates over a period of time from its GPS system and makes that information meaningful and usable.

Ford is counting on this gathered data to make it possible for the vehicle to optimise itself to deliver the best result for performance and efficiency.

Recently in California, the Ford researchers presented a scenario in which the vehicle on-board computer would welcome a driver by asking a basic question:

“Good morning, are you going to work?”

If the driver answers yes, an optimised engine control profile would be created so the trip would use the predictive technology based on the available known data.

Once the driver confirms the destination, the vehicle would then have instant access to a variety of real-time cloud computing data so it can optimise its performance for that journey.

What is Ford’s Global Vehicle Strategy?

The strategy that Ford wants to use to boost its presence in the global market is based on the idea of a “global vehicle” for a “global customer.”

Information Technology will play a huge part in making this plan work.

This strategy is being called, “One Ford.”

The background here is based on buyer desire and demand that Ford believes is becoming more and more the same around the globe. According to their research nearly all buyers want to own vehicles that are economically and ecologically sustainable.

With design ideas converging globally, building just one vehicle for the global market gives Ford the economies of scale it needs to be commercially successful by selling more cars and of course this would mean profits, which is something most vehicle manufacturers are currently struggling to do.

The next-generation of Ford Focus is a classic example of this.

Ford wants the Focus to be a real “global vehicle”. Others will follow of course. The Focus will be sold, owned and driven by Americans, Europeans, Asians, Australians and New Zealanders and by other people throughout the world. Fords world then becomes one market with the “one vehicle” concept being bought by everyone.

How does this new IT Direction help Ford?

“One IT” will deliver a foundation for globalisation with a real-time global information network. The advent of Cloud Computing is now helping to make this possible.

In the past, Ford has configured its development and production to flavour region by region. 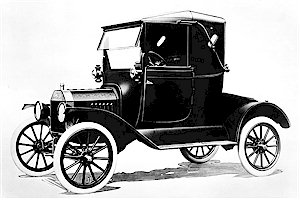 Right now the American automaker is quickly moving its focus, resources and products to a
“One Ford” one flavour global solution. (Kind of reminds you of the old saying “any colour as long as it’s BLACK”).

Ford is first moving toward developing the “One IT” strategy.

“One IT” will help to provide the best universal communication across the globe and also allows safeguards for the flow of that information between workers and decision makers in the Ford plants over the four different continents. Ford will first need a “One-IT” strategy to help achieve its “One Ford” goal.

The plan is ambitious and relies on turning three major regions into one coordinated global region.

Currently Ford operates in these three regions:
1. North and South America
2. Europe, Africa and Russia
3. Asia and the Pacific Rim.

Ford has always operated with three separate corporate computing centers. Very soon there will be just one.

Singapore, its Asian center has already been disbanded.
Ford’s one global network capability is well on its way.
The strategy for global synergy is very clear.

Ford had three different production process versions at work at the same time all around the world. Now Ford is on track for just one version to emerge.

Ford is saying that the “One-IT” strategy is the greatest possible challenge for the company as it looks to the future.

How smart can a vehicle get?

The requirement of computerised tasks in vehicles keeps escalating and continues to add more cost pressures to the production cycle.

Like smart phones, smart vehicles now require ever increasing IT support for the development of the new applications, operating systems and many other vehicle related systems. Customers require greater compatibility so they can use their own smart devices.

The Ford Sync centralised information system in the cockpit, which had moderate success initially, has been developed to cope with this type of customer demand. 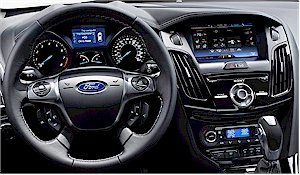 With SYNC, Sync Applink and MyFord Touch, Ford has been leading the automotive industry in bringing voice recognition, touch screens, apps and connectivity to its vehicles at a time when most of these features were only available in more upmarket cars. While these new systems have helped to drive sales, Ford’s reputation has suffered a little over the last year or so as often these systems turned out to be too complex, distracting and a bit clunky.

Ford is introducing a new interface that does away with most of the clutter. It keeps the same basic four-quadrant touch screen that displays, entertainment, climate, navigation and phone. It’s been done to make using the system more intuitive, each single screen has been redesigned with simpler graphics, larger fonts and provides a more readable screen for the driver without any unnecessary distractions. By just optimising the software it is now much faster but still works on the previous hardware in order to ensure compatibility for older vehicles. Younger drivers in particular, although not totally restricted to age, continue to gain in appetite for these new applications and interactive features.

Driver assistance systems and electric vehicle mobility are fields that already exist at Ford. However they can be enlarged, improved and upgraded. It is clear that IT support for new development and production is becoming more and more important for the “One Ford” and “Global Vehicle” market.

Are we moving toward a vehicle that doesn’t need to be driven by a real person?

Why don’t you tell us what you think?