Home > Customer Service > News Updates > 2012 Articles > What about Hydrogen Fuel?
When you listen to the car experts and the way they talk about alternative fuels and the idea of retiring the internal combustion engine you can get a little uncertain about what the future might hold.

The main driving force behind all this is a desire to be cleaner, safer, more affordable and yet retain the passion about owning and driving an automobile. Global figures point to the fact that about 750 million vehicles are alive and running on the planet to today, give or take the odd million. That’s less that 15% of the worlds population owning and driving cars.

Cars still and will continue to remain an important part of many people’s lives for something more than just transport from one place to another. Remember songs are written about cars not fridges or computers. 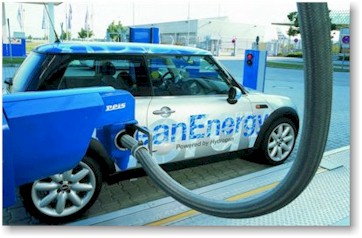 What is emerging however is that environmental health is one of the most important concerns for the automotive industry as a whole. The deteriorating quality of the environment and issues such as global warming has made the carmakers and most of us think about the sustainable, renewable and safer natural resources that can be used in the car industry for the years ahead.

I think we can agree that you cannot stop using vehicles and thus stop air pollution by tomorrow. But at least we can look out for better alternatives and initiate a helping hand towards the cause of reducing air pollution, and thereby prevent further spoilage of the environment. Some researches and studies have revealed that the use of hydrogen-powered cars could prove to be a better option over the conventional cars. What are the hydrogen cars pros and cons?

What’s Hydrogen Powered?
In simple terms the definition of a hydrogen-powered car; a car or a vehicle that uses hydrogen gas or liquid as a fuel for its engine to work. Now there are two types of hydrogen cars. One is using hydrogen as a fuel to the internal combustion engine of the car, and the other is to use hydrogen fuel cells to provide power for the car.

Hydrogen Fuel with an Internal Combustion Engine
Gas or liquid hydrogen in a compressed form, can be used as fuel to power the internal combustion engine. Hydrogen gas is heavy and flammable, whereas liquid hydrogen is flammable but lighter. However, both forms of hydrogen are useful and the decision depends upon two things, the frequency of use, and the cost involved in setting up the system.

Hydrogen Fuel Cell
Hydrogen fuel cells are mostly used to provide the power for the electric engined car. Hydrogen and oxygen chemically react with each other to produce the electricity. These gases pass through an electrically charged permeable membrane. Further, electricity is generated from the charged ions, and the power generated through this process runs the car. Unlike petrol cars that produce harmful gases and pollutants as a by-product of the combustion, here, the hydrogen powered fuel cell cars release water and some heat as the only emission.

What’s good about a Hydrogen Powered Car?
OK what’s not so good?
The concept of hydrogen cars is relatively new for most people, and therefore there is an attempt to make everyone aware of this possible future technology. Research and experiments are still in progress to eliminate the cons and increase the pros. One thing is true over the years; cars have got better, safer and cheaper. It’s one of those things that we all need to be aware of, just watch and wait for the right solution to come along.