Home > Customer Service > News Updates > 2012 Articles > The FordSYNC Interface
The initial feedback is very positive. FordSYNC has a 20cm touchscreen. It's much larger than competing vehicles, such as the VW Golf or Holden Astra. 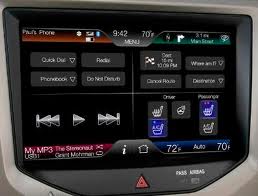 What’s important is that the interface looks smarter and responds quickly than before.

FordSYNC’s interface, layout and functionality are based on a quadrant screen structure that includes the connectivity, audio player, climate control and navigation system.

In the first corner Ford has partnered with navigation specialists NAVTEQ and TeleNav to get a solid looking and well preforming navigation interface. What FordSYNC's navigation system doesn't offer is Internet connectivity.

Another corner has the media audio playback which includes a USB storage, Bluetooth streaming, smartphone syncing and a CD player.

The third corner carries the climate control system and all your devise connectivity is found in the fourth corner.

For your devise connectivity you can either plug in a USB 3G adapter or hook up your smartphone for any Internet you may need in your car. There are some advantages using this approach. Firstly, it means you don't need a separate cellular data account for your car and secondly it makes it easier to keep mobile Internet access speeds up to date. The other key issue here is that most people update their smartphones for newer and faster models much more often than they update their car.

While talking about connectivity, Ford uses SYNC's Wi-Fi to install software in vehicles during their manufacture. Interesting information, but so what! Well, Ford plans to extend the use of Wi-Fi to enable owners to do updates including app installs. Imagine parking your car in the garage and wirelessly downloading the latest apps. Well, maybe?

What’s not sitting in one of the corners of the touch screen is an important part of FordSYNC. It’s the voice command or recognition system. It’s only with continued use do you learn whether a voice input system is reliable and consistent enough to be any good. However, we have read that under test conditions the FordSYNC interface for voice recognition was 100% accurate. All of which means the success of FordSYNC will come down to two main factors. The costs and of course the speed with which Ford adds other connected features.

If the costs are low enough, then FordSYNC will be an attractive option even without any connected features. However, this market is moving faster and faster and Ford would do well to add apps like Spotify (a digital streaming musical service), along with features like Google searching, send-to-car (Google Maps) and social networking support as soon as possible.

To finish, for those of you who understand geek talk. FordSYNC hardware has a Freescale i.MX51 SOC with a single-core ARM Cortex A8 processor running at 600MHz. 512MB of RAM and 2GB of flash memory. As for background software, FordSYNC is built on Microsoft's Windows Automotive which in turn is based on Windows CE. So now you are up with the play if you can understand all of that.

It's obviously been a struggle for Ford to get SYNC up and running for other markets outside of the USA. On this early showing, we have read it still has some work to do.