Home > Customer Service > News Updates > 2012 Articles > Trouble at Mill...
By the time you are reading this it may well be all over and sorted, but at the end of April 2012 Ford Australia were looking at being forced to send up to 1800 workers home from its Australian Geelong and Broadmeadows plants. All because one of its Victorian based parts supplier had got into trouble with the landlord. You know what it’s like when you don’t pay the rent.

In this case it was more than $100,000 in unpaid rent. The doors were to be locked on over a 100 workers at CMI Industrial in Campbellfield.

The parts maker was going into administration before the end of that week if the rent remained unpaid or some solution was found. 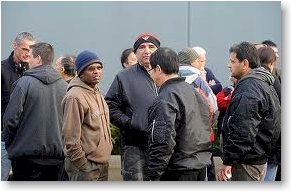 CMI Industrial supplies suspension components to Ford for its Falcon sedan and Ute and its Territory SUV vehicles. Ford Australia’s just in time supply policy means the carmaker only had enough suspension parts to continue production until the end of that week. If no deal were struck before Thursday, Ford would be forced to stop production and stand down manufacturing workers indefinitely.

Ford Australia has been providing some financial assistance to CMI Industrial, and a company insider said a move into administration would be the best outcome for all parties to help sort out the problem. In another related case, Coburg-based parts supplier APV Automotive Components was the other day rescued from receivership after a deal was struck between them and Australia’s three vehicle manufacturers: Ford, Holden and Toyota.

They make fuel fillers, rear suspension struts, steel and other fabricated components. APV Automotive Components stood down 126 workers in early April 2012 after announcing it was unable to pay its workers.

The plant reopened in late April following the restructuring that included 34 voluntary redundancies and guarantees with the local carmakers on parts price rises and future parts orders.