Home > Customer Service > News Updates > 2012 Articles > Ford Kuga
This is the new crossover Ford going by the name, Kuga. It’s German built and priced in New Zealand at $53,990. It will be another model of the “One Ford” global vehicle strategy.

The Kuga went on sale in New Zealand late in 2011, about 3-years after it appeared in Europe and only weeks before the updated model was unveiled at a motor show in California. 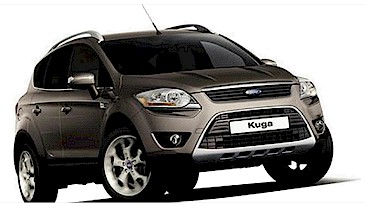 The latest model won't be available in New Zealand until some time in 2013, at which time Ford expects to offer a choice of petrol and diesel alternatives.

So currently, it’s being offered with a turbocharged 2.5-litre five-cylinder petrol engine.
There are diesel versions available in the UK but diesel is not coming to New Zealand just yet. According to Ford, the demand for diesel is huge in Europe so that is why it hasn’t been made available for the New Zealand market.

Hopefully, when the new updated model arrives in 2013, there will be a diesel option to look at.

The new model is a “One Ford” global car, just like the latest Focus. Kuga’s chassis is based on Ford’s acclaimed C-car architecture.

(See the article in the News Updates section of our website titled “One Ford”).

An obvious change is a longer wheelbase. The Kuga customers in the UK complained about the lack of space, so the new model has a 100mm longer wheelbase, and is also a little wider. Ford estimates that the Kuga will have about 20% more room as a result of the increased length and width.

The power plant of the updated 2013 model will use the very latest 1.6-litre Ford EcoBoost turbocharged petrol engine like we are hearing about now appearing in the Ford Focus, along with a choice of turbo-diesels. 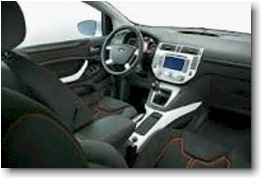 It is likely the Kuga will continue to come with the full time AWD system as well as a regenerative braking system and stop-start. Other standard specifications include an Electronic Stability Programme (ESP) that combines Anti Rollover Mitigation (ARM) and ABS braking with Electronic Brakeforce Distribution (EBD).

The 2.5-litre petrol engine develops 147kW and is coupled to a five-speed automatic transmission. Ford claims general fuel economy for the Kuga of 10.3 liters/100km or 27mpg.

The current model available in New Zealand is only available in Ford's top-end titanium spec and has been quietly praised for its handling and general ride, which is due directly to its use of the Focus foundation.

Inside there are heated front seats, leather trim, cruise control, dual-zone climate control, Bluetooth connectivity, and keyless stop-start functions. Included is a Liftgate tailgate that offers separate access by micro switches to the upper tailgate section or both sections at the same time, under-seat and under-floor storage compartments, rear tray tables, and a 60:40 split rear seat that folds flat to boost luggage carrying capacity from the usual 360 litres up to 1355 litres when the seats are folded flat. 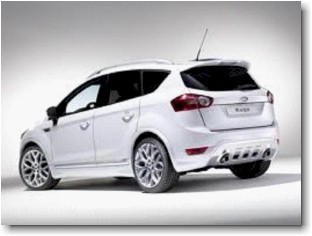 The Kuga has a strong standing in Europe, where it has been extensively admired for its performance and handling dynamics. It also holds the maximum five-star occupant rating in the European NCAP crash-testing system.