Home > Customer Service > News Updates > 2012 Articles > What is EcoBoost?
What’s this about EcoBoost?
Ford’s new vehicles are starting to be equipped with EcoBoost technology. EcoBoost is Ford Motor Company’s new name for a range of turbocharged, direct injected petrol engines. This technology is specifically designed to deliver power & torque at a rate similar to larger engines while delivering around 20% better fuel efficiency and 15% reduced emissions. Compared to the power and efficiency of hybrid and diesel technologies, Ford is saying that the EcoBoost is an affordable and genuine alternative. Ford is pinning its future for internal combustion power plants on this technology. 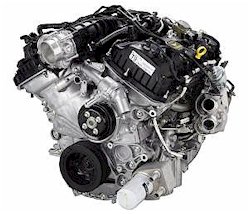 Ford has also announced a 1.0 L, 3-cylinder version EcoBoost engine to be developed at Ford's Dunton Technical Centre in Britain. Production is planned to start in April 2012. The 1.0 L will come at first with two versions: A 74 kW version and a 92 kW version. Because you get vibrations with a 3-cylinder design, the flywheel has been unbalanced to ensure smoother running, eliminating the need for balancer shafts. The engine block is to be cast iron instead of aluminum, and the exhaust manifold is cast into the cylinder head, all done to reduce the warm up times and therefore greater efficiencies. It also features an internal timing belt, bathed in the engine oil, giving longer life and greater efficiency. This engine will be available in the Ford Focus and the Ford Fiesta.

Ford has so far unveiled three different 4-cylinder engines equipped with EcoBoost technology in both concept and production vehicles. Like the 3.5 L EcoBoost V6, all the engines are turbocharged and direct injected. The production engine EcoBoost family was officially announced at the time of the 2009 Frankfurt Motor Show. 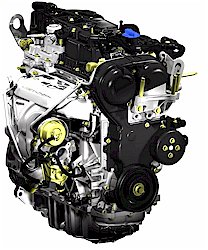 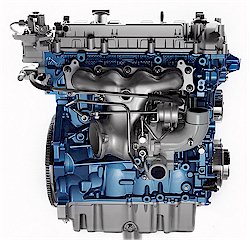 It is the first EcoBoost engine to include Twin-Independent Variable Cam Timing delivering 10-20% better fuel economy while maintaining the same performance of a 3.0 L V6 engine, not bad for something almost half its size.

According to Ford official EcoBoost production began in May 2009 at Ford's Cleveland Engine Plant in the USA. However a 3.5 L V6 version first appeared in the 2007 Ford Lincoln MKR Concept vehicle under the TwinForce name. This engine was designed to deliver power and torque equivalent to that of a typical V8 power plant, while looking to achieve at least 15% better fuel efficiency and reduced emissions. The concept TwinForce engine was rated at 309 kW. When the same prototype engine reappeared in the Lincoln MKT concept vehicle in 2008 at the North American International Auto Show, the name had changed to EcoBoost.

The EcoBoost production engines use the Duratec 35 V6 engine block. The fuel charging and delivery systems can reach very high fuel pressures of up to 2,150 PSI, this is necessary for efficient operation for the direct fuel injection system. It uses two Garrett GT15 turbochargers, which can spin at up to 170,000 rpm and provide 12 PSI of boost. The turbos are set up in a twin-turbo configuration. The engine can consume up to 25% more air over a naturally aspirated counterpart. Through the use of direct injection, the engine needs only regular-grade petrol to run, although premium fuel is still recommended.